It's 6:35pm, and I'm sitting in the dark with my computer and two candles burning on the table. The power has just gone out and will probably stay out for 2-3 hours.

I still remember the first power out we experienced on the day we arrived in Malawi. The kids screamed and we felt so helpless!!

14 months on, and power outs are just a part of life here in Malawi. The kids don’t scream anymore, they just laugh! Considering power is a luxury for most in Malawi, we are really very blessed to even have it at all. 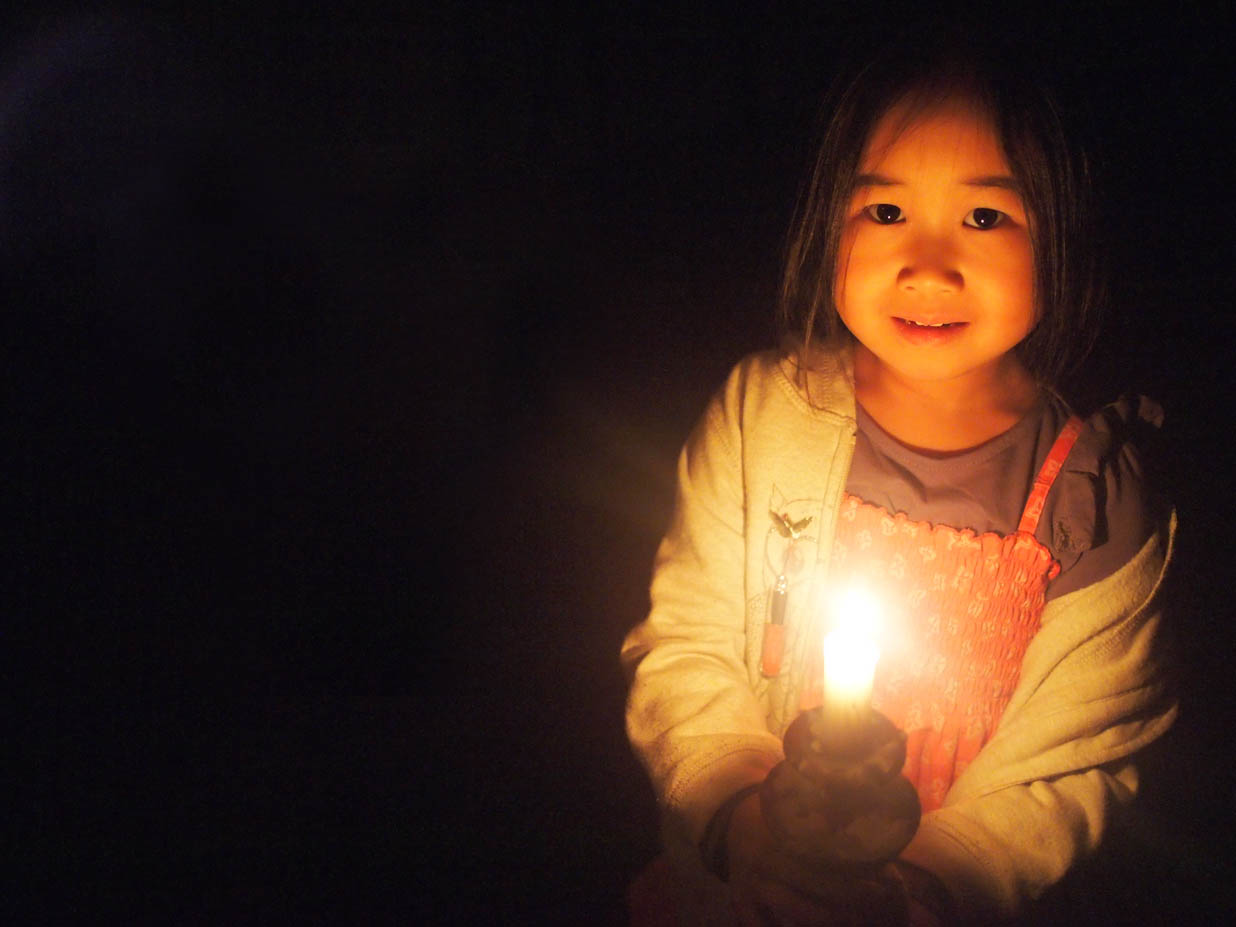 In our area, we get 2-3 scheduled power outs a week. Both lasting 1-2 hours and most occur between 6-9 pm. It’s not so bad when they are predictable, we have learnt to work around them and be ready. Occasionally, the power company (ESCOM) would give you notice for an all day power out (8-5pm) due to maintenance. But these past 10 days have been different… we have had more hours without power than with power. The first ‘surprise’ power out caught us off guard and lasted about 4 hours, since then we have had once-twice daily power outs each lasting 3-12 hours, which meant on some days we only had 3-4 hours of power during the day! We soon found out that it was due to a broken generator at ESCOM, which would take about 2 weeks to repair. We also soon worked out a pattern: One day the power would go off from 5am til 1:30pm, the next day it would be from 1:30pm to 9:30pm. This is called load-sharing, where one area would get half a day while the other went without, and vice versa.

We have candles all around the house and in most of the rooms, the kids have rechargeable lights. We have a ‘candle shelf’ above the kitchen stove where we keep all our candles on stands, matches, and a hand-cranked torch. When the power goes out, we know where to go for candles. We also have candles around the house and boxes of matches in high places everywhere (out of the kids’ reach). Another go-to spot for lighting is in the corner of our lounge room, where we recharge our big rechargeable light. This is the one the kids take around the house (eg. to the toilet) rather than candles. We love the rechargeable lights/torches that my brother got us, which switch on automatically when the power goes out, they are in the kids’ rooms so they don’t freak out when the power goes out in the middle of the night and their night lights turn off. The security lights outside the house also go out. This makes us a bit uneasy as it increases the risk of break-ins at night. 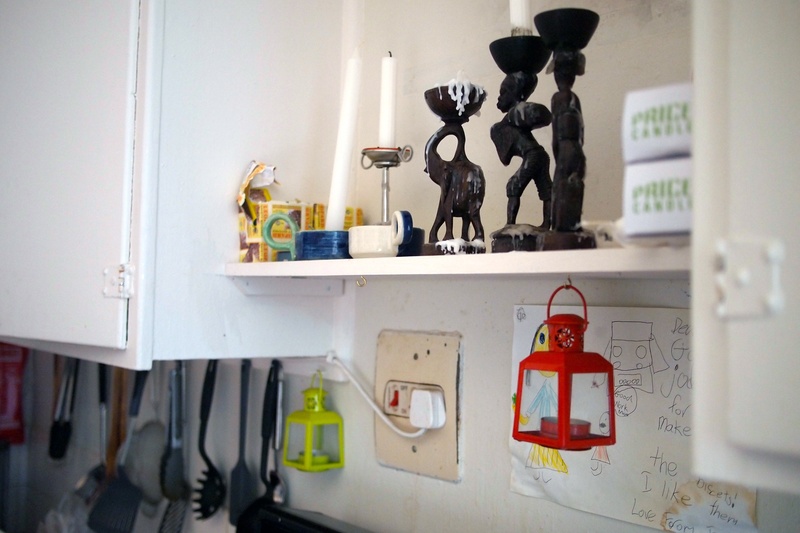 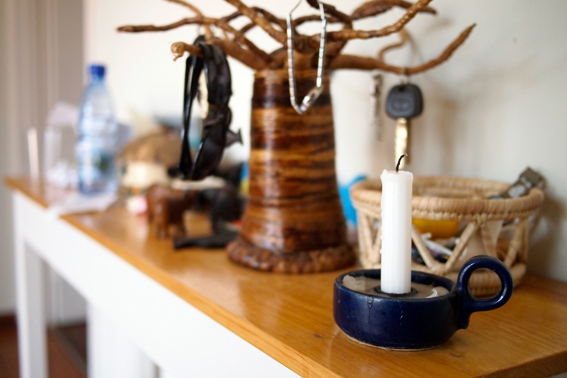 Our water is heated by an electrical hot water system. When the power goes out, the hot water system stops heating. But there would usually be just enough already heated hot water for one bath. To conserve hot water, we bath the kids one at a time in a small tub (using the same water, starting with the cleanest kid). When we run out of hot water, we heat more in a big pot on our gas stove. We have candles in the bathrooms so we don’t have to bathe in the dark, but it also makes for a very relaxing candle-lit bath! 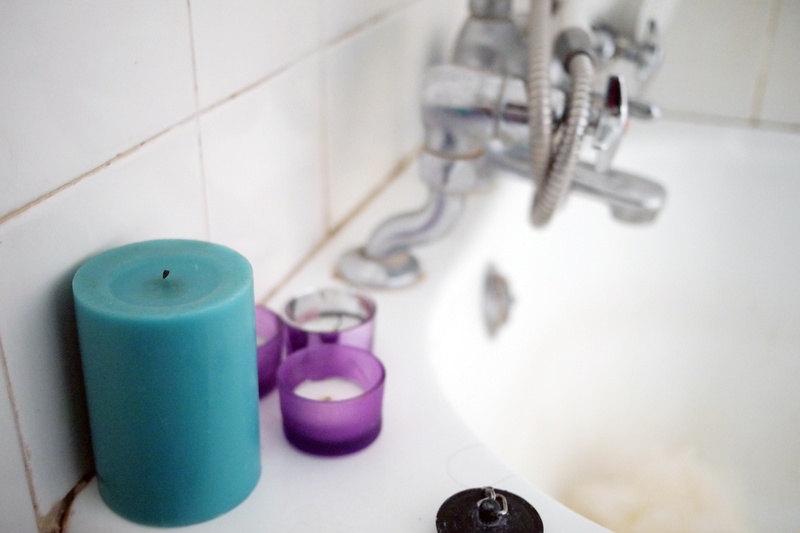 No power means no microwave, no kettle, no food processor, no mixer, no stove, no oven. We use a single burner gas stove during power outs. We take ‘power out nights’ into consideration when planning meals for the week and plan meals that do not require the oven and can be cooked on one bruner eg. spaghetti bolognaise. During the school term it is not such a big problem as we are done cooking and eating by the time the power goes out at around 6pm. But during the weekend and school holidays, this is a bit more tricky as power outs happen right in the middle of cooking. Though we generally aim to finish cooking by 6pm, sometimes the unpredictable happens and we are delayed. I have learnt that if the power goes out within the last 15mins of something cooking in the oven, leaving it in there for 30-45mins without opening the door generally finishes the cooking process!  However, you can have the best laid plans but sometimes you still get caught out. Recently I was in the middle of making bread (which required at least an hour for the dough to rise before putting it in the oven) and had timed it so that the bread would be baked before the power went out... except the power went off an hour early, just as I was about to put it in the oven! 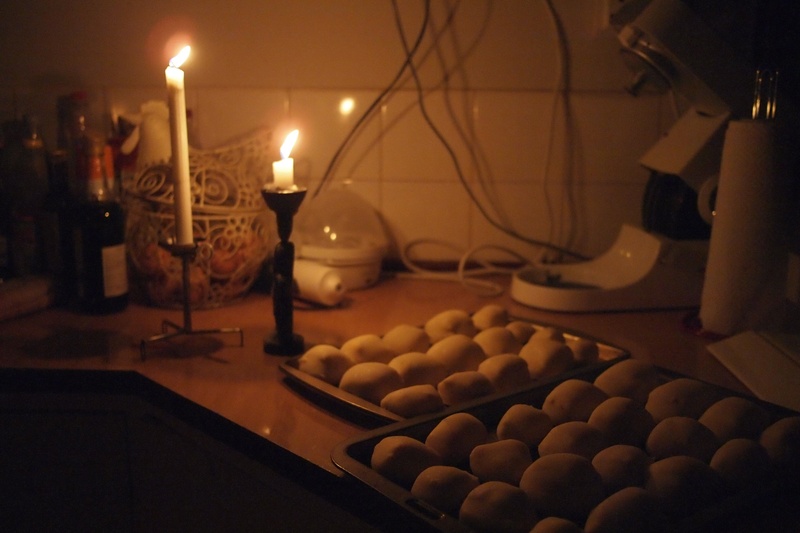 The fridge and freezer also stop when the power goes out, if it is a long one, things begin to defrost. Our chest freezer is great as the frozen food keep one another frozen so much more than the freezer compartment of the fridge.

We don’t have a lot of entertainment items, except for a data projector and DVD player. We don't have a TV, not because we’re opposed to having one, we enjoy watching TV but there’s not much to watch here so we never saw the need to get one. We watch DVDs using our 10-year-old data projector (and it’s still going strong!). For the kids' DVD time (half hour before dinner), if we are expecting the power to go out soon, we don’t even bother with the projector and just show DVDs on our laptops, because you can’t eject a DVD mid-movie without power! Our internet wifi router is electricity powered so when power goes out, our internet goes down as well. But we have just recently purchased a dongle so now we can still use the internet (albeit slow, and as long as the kids haven’t drained the computer batteries watching DVDs!). Having an iPad also helps too, so we can continue work on urgent things even when the power is out and the kids can play games in the dark as it provides entertainment AND light! 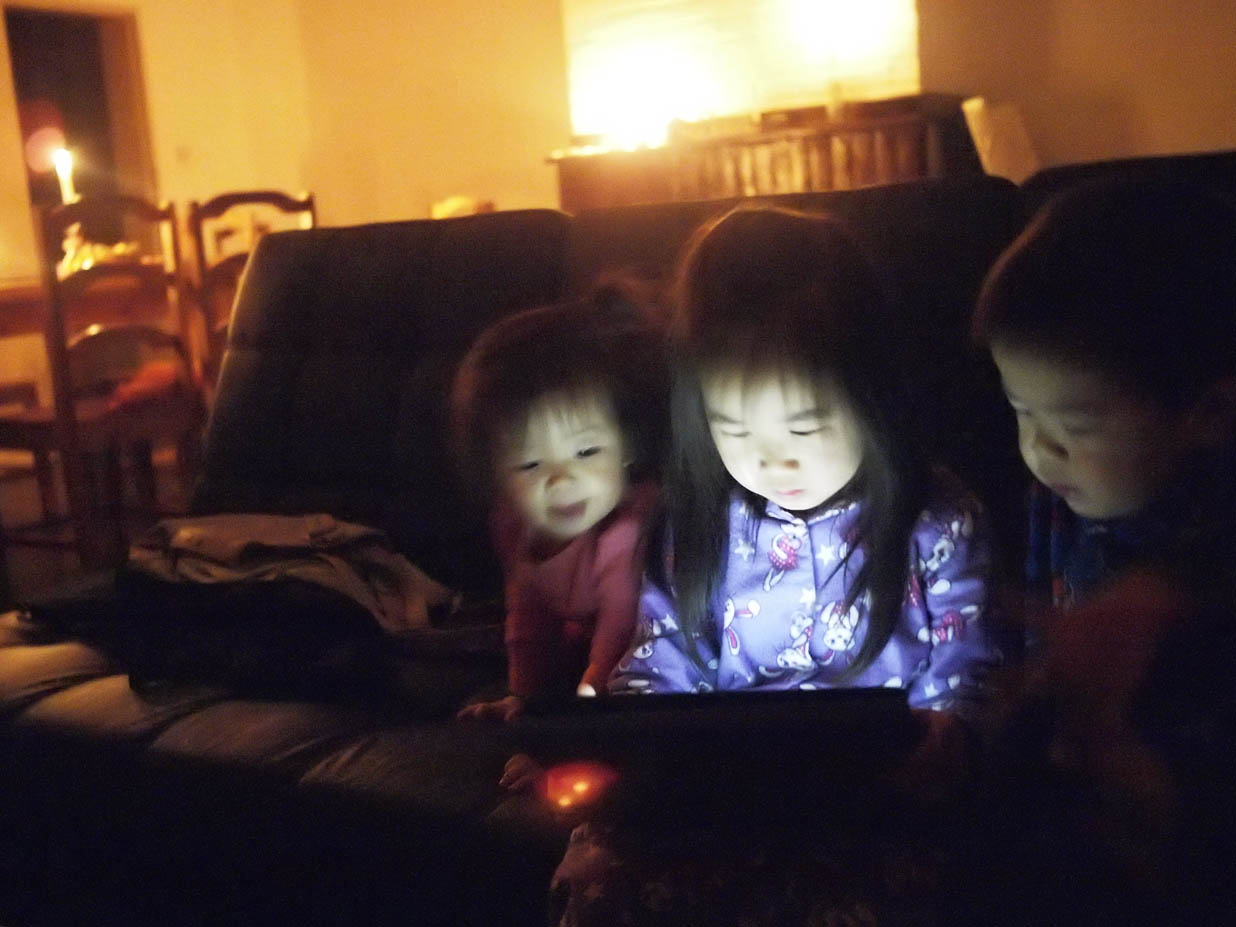 Power out means no washing machine, no dryer, and no iron. Our clothes need to be heat treated after sun-drying here in order to kill off harmful bugs that can get on the clothes and into our system. Our laundry process goes something like this: wash, dry on line, iron/dryer. This is a problem when we are without power. The record number of days we have worn our underwear currently stands at 3! Things get a bit tricky with two kids in school uniforms, which include sports uniform and school swimmers.

Alarm clock - we have learnt the hard way to not rely on our plug-in alarm clock but to also set our phone alarms, as well as a battery powered alarm clock because the power can go out in the middle of the night (we put a back-up battery in the alarm clock but it doesn't seem to work).

Sewing machine - I don't sew ALL the time, but I do like to sew here and there. It is a pain when the power cuts out when you are trying to finish something. Recently I was sewing a farewell gift for a friend and would've really appreciated continuous power, but it was a blessing in disguise as I was forced to work out how to operate the manual sewing machine Pete got me for my birthday! Local tailors use the same kind of manual sewing machine. 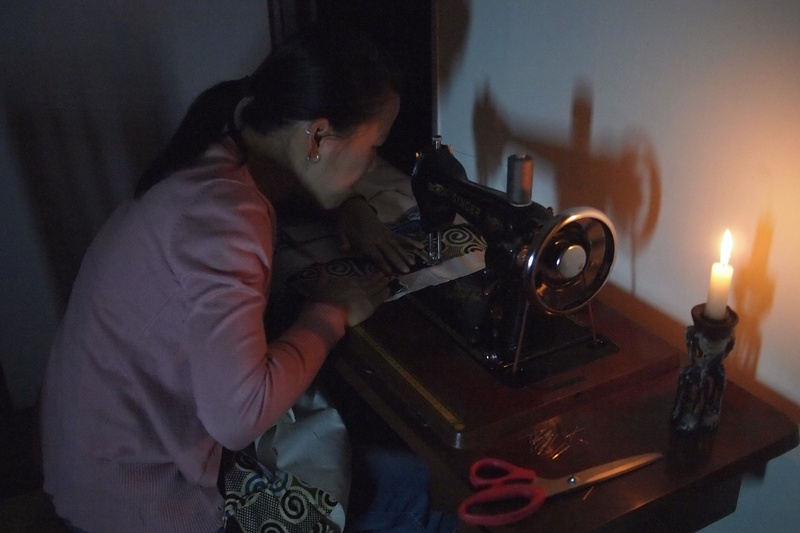 Water out is a bit harder to live with if you are not prepared. Water out means no water for drinking, washing, bathing, and... flushing.

The water pressure generally runs low in the late afternoons, which is usually a sign that water may go out soon. Water-outs don't come with warning and are not scheduled. Water-outs occure more frequently during the hot season (Sept-Oct) when water demand is high. Lately we have been getting up to four water outs a week, with each lasting up to six hours.

Bathing and washing is not too big a problem since we have learnt to store up big bins full with water. We have a bucket of water next to each of the toilets in our house for flushing (each bucket is good for about three full flushes), 50L bins in the bathrooms for bathing, and three 50L bins outside the kitchen to use for washing up and occasionally - when the water and power go off at the same time – to bathe the kids outside in the warmer season as the sun warms the water to a nice temperature by the afternoon. However, we must remember to refill them once they are empty or else we’re in trouble come the next water out. 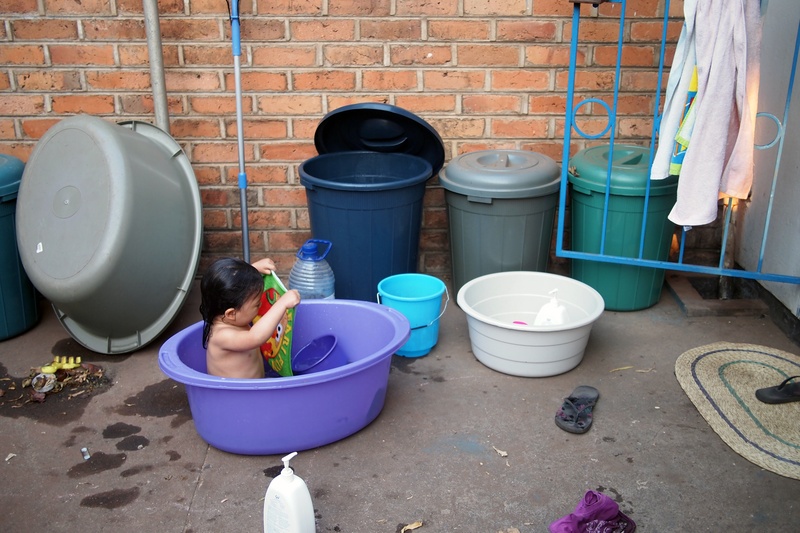 Water out also means no laundry washing. So it is a pain when water and power take consecutive turns being out as you need both on at the same time to wash clothes! Some days we do laundry late at night to make the most of ‘power/water hours’.

So there you have it. Life without power/water.

See, it really is not that bad once you get used to them!

Excuse my blunt message, but I'm looking for websites like yours to try out our new software that is designed to help you see exactly where your site is placed in the Google search engine listings against your competitors.

You can then use the data to understand how to improve your rankings and we offer free advice too.

There is a 7 day free trial and if you can let me know what you think, that would be a great help - https://www.track-r.net

Reply Allenwet
2:36 AM on May 31, 2020
Hurry up to look into loveawake.ru you will find a lot of interesting things

Clailiasax Kamagra Directions Of Use